Brothers of the Buffalo: A Novel of the Red River War

Brothers of the Buffalo: A Novel of the Red River War by Joseph Bruchac follows two young men, one a Cheyenne warrior, the other a former Black slave, as their paths repeatedly converge over a three-year period in the early 1870s. The backdrop is post-Civil War Virginia and the Southern Plains, where profound changes were taking place for both Blacks and American Indians.

Blacks, freed from slavery barely 10 years earlier, were finding their way in a political and social maelstrom where poverty was endemic, social mores changing, and work hard to come by. For young Washington Vance, becoming a Buffalo Soldier in the 10th Calvary seems a viable way to earn enough money to support his mother and younger sister. 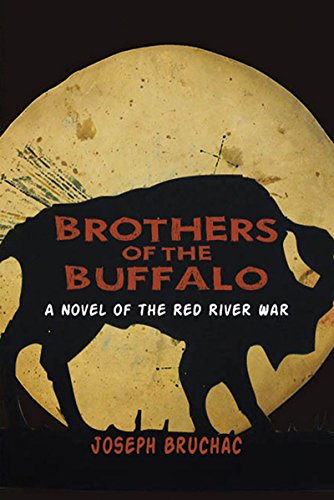 Brothers of the Buffalo: A Novel of the Red River ...

A captivating and historical story of two young men on opposing sides of war.  In 1874, the U.S. Army sent troops to subdue and move the Native Americans of the southern plains to reservations. Brothers of the Buffalo follows Private ...

American Indians were continuing to lose their homelands to encroaching white settlers protected by the U.S. Army. Cheyenne warrior Following Wolf also has a mother and a sister for whom he is responsible—not only for providing food and shelter, but also for protection from the military. No longer at war with the South, the U.S. Army is now charged with “bringing in” the Plain Indians from their lands to the government camps where they can be controlled.

The Red River War was one of the final armed conflicts between the Plains Indians and the U.S. military. Arapaho, Cheyenne, Comanche, Kiowa and warriors from other tribes had been leaving the reservations where food was scarce and living conditions deplorable to hunt and raid. General William Tecumseh Sherman of “March to the Sea” infamy and the 10th Cavalry attacked the Indians in the Red River Valley in Texas and eventually the warriors and their chiefs surrendered.

Bruchac says he wanted to write about this particular moment in history because he had heard stories about it from his friend Lance Hanson, a Cheyenne poet and a member of the Dog Soldier Society, and many others, whom he describes as the inheritors of these events.

“Taken from another direction, I was fortunate enough to be a volunteer teacher in West Africa for three years and got to learn a lot about some African cultures, including the Hausa people,” ancestors of the fictional Washington Vance.

“What I wanted to do was to tell this story the way it has not been told before. Even though there are a lot of things that have been written that deal with this period in history, I found that there are perspectives that are not really reflected in those writings—the Native perspective of what happened, as well as the perspective of the men who were the Buffalo Soldiers, former slaves engaged in a campaign that was basically enslaving, or putting into something close to slavery, the Native population of the Southern Plains, because that’s what the chaining of the Native people to the reservation communities truly was at its height,” Bruchac told ICTMN.

Twas the Night Before Bayou Classic